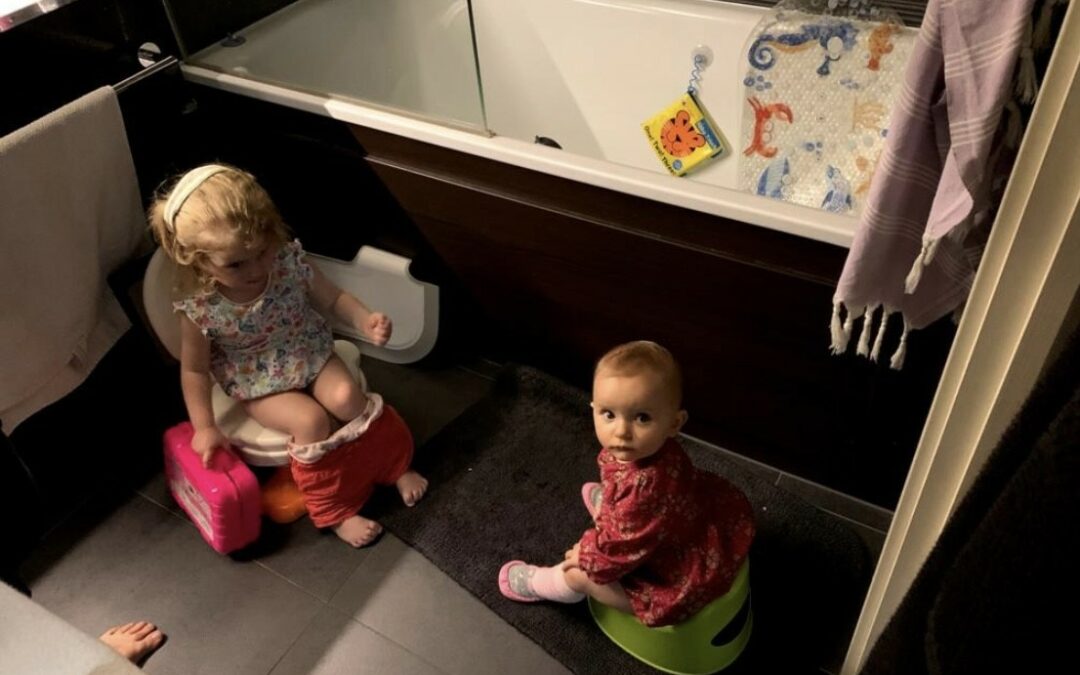 Whilst researching reusable nappies, you may have come across the terms Elimination Communication (EC) or Baby-led Potty Training – a technique used to reduce the reliance on single-use nappies by instead introducing signals or ‘cues’ to catch a baby’s urine or poo with a mini potty or over the toilet or sink.  EC is making a strong comeback in the modern way of parenting and can be seen as the most zero-waste, environmentally friendly and cost-saving way when a baby is not yet potty trained.

Leading up to one of our Reusable Nappy Meet and Give and Takes, Corina – a parent to two lovely girls – reached out to us with a generous preloved reusable nappy donation. She told us that she had used reusable nappies and done EC with her children, as we are not specialists on EC and no one at Real Nappies for London has tried it with their children, our interest was sparked so we asked Corina to talk about her experiences.

When did you start EC?

Whilst using washable nappies with my first daughter, Audrey, I was convinced there had to be an even more environmentally friendly way to address potty training. We started EC with Audrey at 6 months and continued all the way till she was fully potty trained at 23 months but given that we started Nursery at 7 months our progress stalled, thus potty training later than her younger sister. Once I decided on following EC and in light of my experience with Audrey, I wanted to embrace it full-on from the first days with our second baby, Iris. In hindsight it was challenging doing EC from the first months as I had no role model to help me figure things out and I was a bit insecure. It would have been so much easier if this were the adopted “norm” and I would have seen dozens of women doing it before, on TV, in the family etc.

Where did you hear/read about Elimination Communication (EC)?

The first time I heard about EC was from my mum. I was born in Moldova, which was a member of the Soviet Union at the time. Disposable nappies simply did not exist. Everyone was doing EC (although it may not have been called that then) and it would have been a total oddity to still see a child not fully potty trained (at least for poo) by around 12 months. My mum kept telling me about the “old” traditional ways and encouraging me to adopt them, but I thought I was smarter and more “modern”. Realising afterwards just how much we regressed from the environmental perspective on this front, I felt quite ashamed. 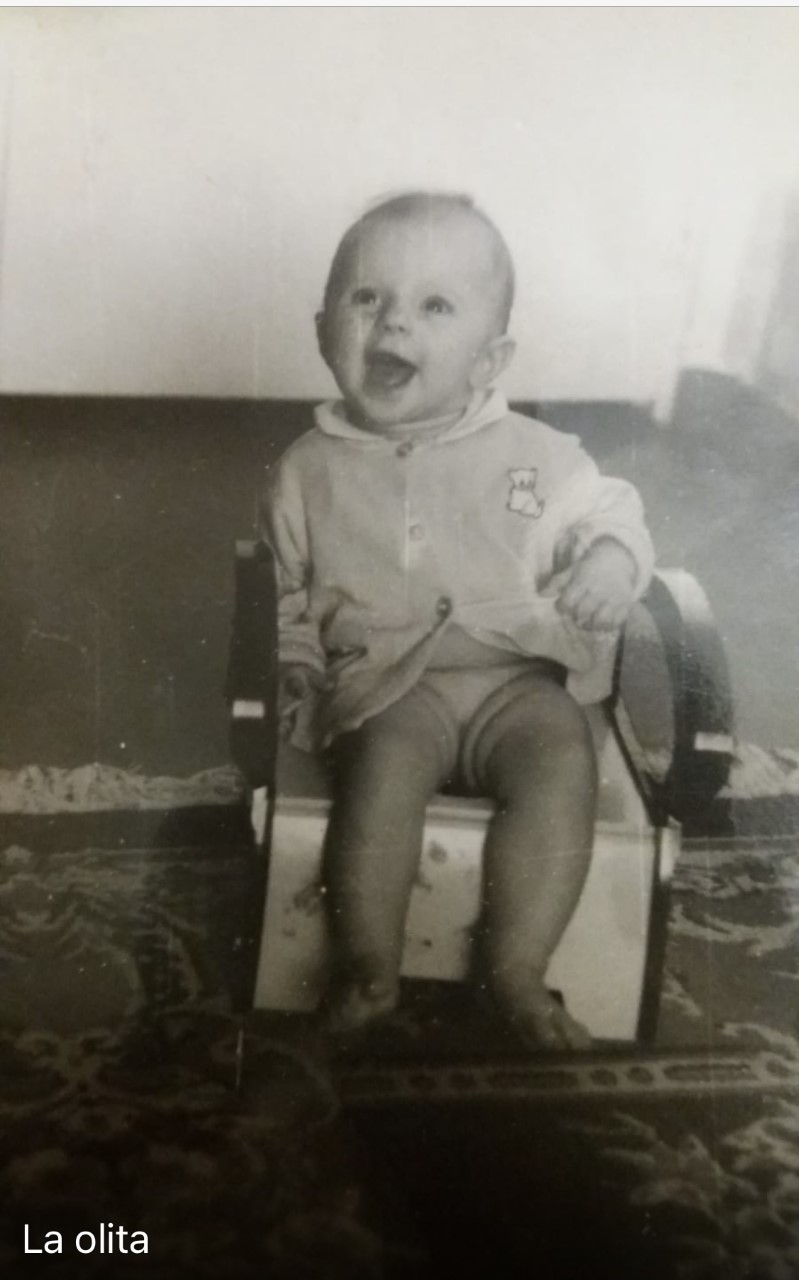 “My mum kept telling me about the “old” traditional ways and encouraging me to adopt them.” – 1984, Corina at 7-8 months old.

What encouraged you to give it a go?

I read Nappy Free Baby by Amber Hatch and I was totally sold on it. Especially after reading how major nappy production companies propagandise babies being in nappies till their fifth birthday as being “ok”. I was absolutely outraged by the amount of waste produced by one child only in the first two years of their life and I thought to myself: what if we received advertisements about EC? But of course, this would be a utopia as EC doesn’t bring a visible profit to any company. In my view, it is simply the right and kind thing to do for the baby, the parents and our planet. Now that I have experienced EC, I would not look back to relying on nappies and would recommend to other parents to give it a go.

Who had the idea (you or your partner) and how did the other react?

Totally me. My husband needed a lot of persuasion in the first couple of weeks. But I have to say he is now totally converted. The reward of managing to read your baby’s signs and being able to communicate with them, not only their need for food and love but also their need for “expelling” was totally worth it. Plus, it has been a tremendous help with colics.

What information sources did you use to learn about EC (websites, books, videos, people)?

After reading Nappy Free Baby, I have been reading all sorts of blogs and websites to top up on my knowledge.

I particularly liked www.sustainablylazy.com for its ease of reading and kindred spirit and www.curatingsimple.com for its pragmatism.

I have also been speaking to people from my parent’s generation, people from different cultures where EC is more the norm (i.e. India, Africa) and London parents who have adopted EC.

What were the ups and downs?

I would say the downs were mainly in the first few weeks when I was already overwhelmed by hormones and sleepless nights and trying to figure things out. I was having yet another thing which I wasn’t that good at added to my list. But as time went by, we all adjusted to a new routine and everything gradually became easier. Our up was certainly when we celebrated our ‘one week in one clean nappy’ at around two months – that was a really big high!

What were the challenges?

The initial challenges were reading the signs and figuring out what was happening and when. Figuring out how to best hold a newborn over the sink or toilet was also new to us. Unlike many of the blogs I had read, my baby’s signaling wasn’t very strong. Most times there were no grimacing or twisting, only occasionally the hysterical cry during a wee. What worked for us was a schedule to work around our feeding schedule. I figured if I placed Iris on a potty immediately after waking up or after food, and also 25 minutes after a feed after digesting; I was most likely able to catch a wee or poo. Gradually, she learnt the routine and would wait till the next potty session to go. 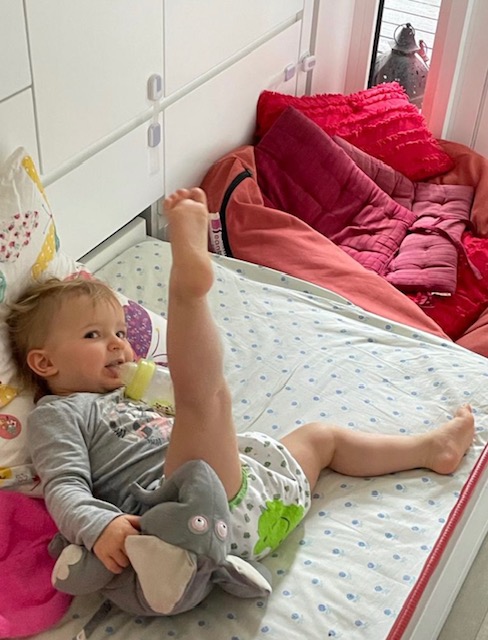 “Depending on your level of commitment to it, you could have a young one year old wearing underwear instead of nappies and calling for the potty.” – Iris at 14 months out of nappies and wearing potty training pants.

What were the benefits?

Oh, the benefits are so so many! Some expected some not. The biggest benefit is the extra bonding you get with your baby over the potty sessions. The pulling faces in the mirror whilst holding them over the sink and the singing over the potty. It just becomes this extra quality time you spend with your baby. The second benefit is the decrease of colic’s. Imagine the difference between doing a poo horizontally and doing it whilst squatting. Doing a poo in a nappy is probably not a pleasant experience, with some babies being bothered by intestinal disturbances and poo around 6 times a day as they cannot expel it all efficiently in a nappy whilst lying down. I noticed a big improvement on the colic’s front with my EC-from birth baby but of course I cannot guarantee it was just this that made the difference. It just seems to make sense.

Another benefit is not having to deal with soiled nappies EVER AGAIN. We literally changed less than maybe ten poo nappies in the entire life of our second baby and the majority of these were before she was 8-9 months old, with potty being the go-to place thereafter. Having changed and scraped poo out of washable nappies for 23 months with our first born (we used washables from birth) I would NEVER look back on that. I think EC did also greatly facilitated Audrey’s potty training as she had more practice of the potty as we started EC at 6 months. If you start early, depending on your level of commitment to it, you could have a young one year old wearing underwear instead of nappies and calling for the potty. The transition to traditional potty training will be seamless. We didn’t even notice it with Iris. Just knowing that babies are capable of that, how can one not at least give EC a go.  We also gained confidence as parents and learnt that babies are amazingly intelligent human beings with natural reflexes to keep dry and clean. All we have to do is build up on that and not hinder or delay it.

We didn’t even get to the huge environmental benefit. With EC, we were down to reusing the same clean nappy for days. We had less nappies to wash and avoided putting disposable nappies in the bin, saving money and generating less waste.

What would you say to a person who was thinking about doing EC with their child?

You are about to embark on an amazing journey. You will never look back on it if you have subsequent children. Once EC always EC.  Also know that you are not alone! More and more parents rightly shift to EC as a more ‘kind to baby and kind to nature’ way to communicate expelling needs. It may seem like one more thing to learn, and take time, but essentially it is learning to communicate an additional need, just like any other needs. We are more aware of the need to play, eat, rest – once you are there you never have to change another soiled nappy.

Did you still use reusable nappies whilst doing EC?

I did use washable nappies and compostable nappies, as well as using some biodegradable nappies during the EC learning phase.

When your child was at nursery, were the staff happy to continue with EC?

We pretty much had to educate the nursery on EC. We embarked on a journey with them, providing them with resources on EC. We have been super lucky with Academic Day Nursery. They have been amazing and this journey would have been much more challenging without them on board. Iris started nursery at 8 months which is a crucial point in the EC journey. It was important to us not to lose out on the hard work already put in.

We wanted to implement the same schedule at nursery as we had at home. Initially we felt that there was no chance of asking the staff to read her signals – especially when our baby did not fall in the ‘very clear signaling’ category and staff may not notice the sign whilst caring for multiple children.

Being at nursery is entirely a new dynamic and stimulating environment for babies, it is very easy for them to lose track when they might need to signal. Persistency on the schedule was key and although the staff were skeptical at first and there were some weeks of adjusting (even some days of regression), everything became a pretty seamless transition. 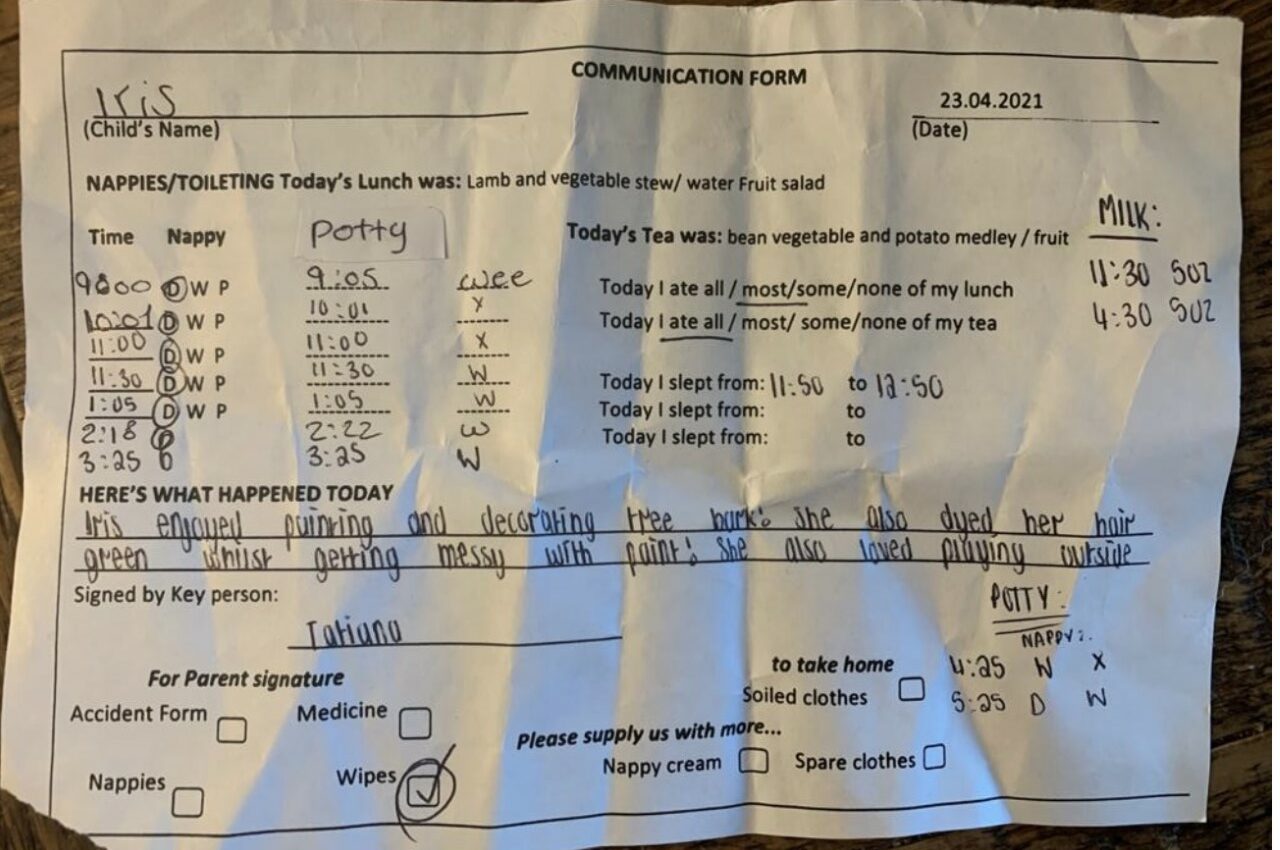 “We wanted to implement the same schedule at nursery as we had at home.” – Nursery EC schedule.

Looking back – Do you wish you had tried it out earlier with your first child?

Absolutely!! Totally!! This would have made our life so much easier! I cannot recommend EC highly enough.

Many parents that use reusable nappies like to combine EC as a way of encouraging early potty training and we would love to hear how your experience was, do write in or tag us on social media – @RealNappiesforLondon

We hope you enjoyed reading Corina’s EC experience and perhaps get inspired to try it with your child.

There is a lot of professional advice and information available on Elimination Communication online. Additionally to Corina’s recommended information sources above, we have compiled a small list below that you might find useful.