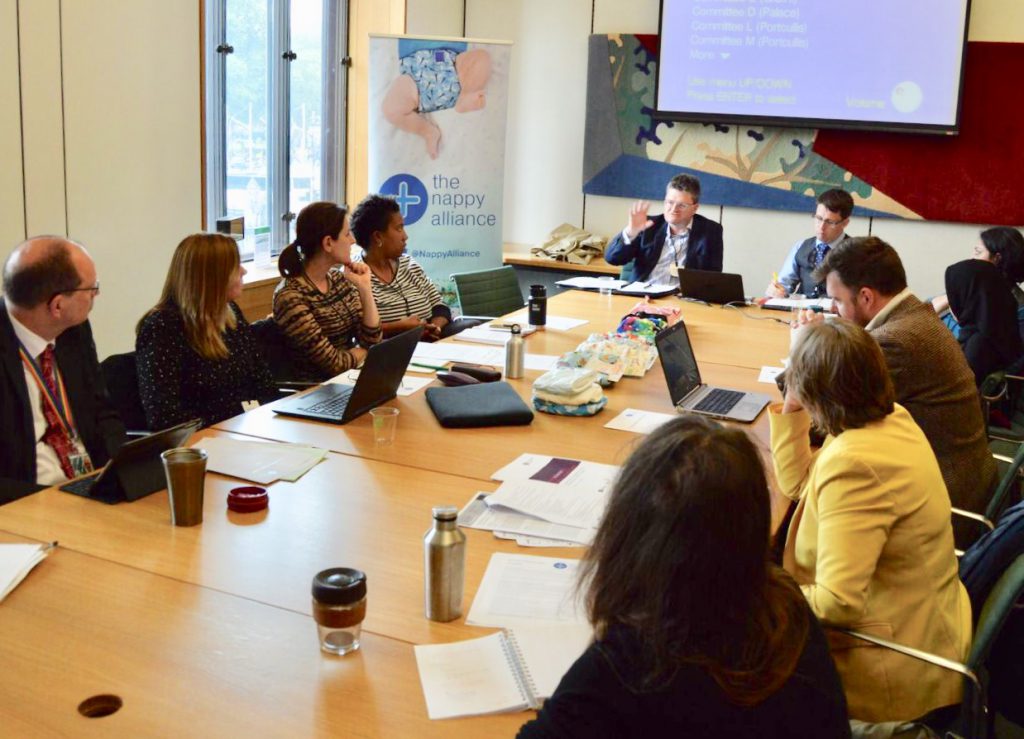 MPs and campaigners met in Parliament today to call on the government to provide parents with more information about using reusable nappies.

The House of Commons roundtable, attended by a cross-party group of MPs, civil servants, NHS midwives and mums, met to discuss the Nappies (Environmental Standards) Bill launched by David Linden MP which aims to reduce single-use plastics in disposable nappies and cut costs for local government and young families.

‘People may not know that the average daily use of disposable nappies has the same environmental footprint as seven plastic bags. The attendance of politicians from across Labour, Liberal Democrats, the Scottish National Party and Plaid Cymru is a clear demonstration that there is cross-party support for the important issue of reducing the waste load of disposable nappies.

‘The Nappies (Environmental Standards) Bill has real potential to help empower parents to make informed choices about the nappies that they use for their children, as well as cutting waste costs for local councils and making a huge reduction on single-use plastics that end up in our environment.’

‘So many parents are aware of the environmental impact of disposable nappies and want to use reusable nappies, but simply don’t know where to start. The Nappies Bill would provide parents with the much-needed information and support to make using reusable nappies easy, accessible and affordable. It’s time to go back to how our parents and grandparents used to do things!’

David Linden’s Bill looks to establish an industry and government-led voucher scheme to promote reusable nappies that meet the environmental standards and to legislate to ensure that manufacturers cannot make false eco-friendly claims.

The UK throws away nearly three billion nappies a year, over 90% of which will go through household waste streams and end up in landfill where they can take up to 500 years to decompose. Even when eventually broken down, disposable nappies generate methane gas adding to global warming and damaging air quality.

The Nappies (Environmental Standards) Bill advocates that parents should be provided with information on the damaging environmental effects of disposable nappies so that they can make informed decisions, as well as being made aware of the financial advantages of reusable nappies for families and local authorities. It will incentivise local authorities across the country to roll out reusable nappy voucher schemes, such as the one currently used by the Real Nappies for London scheme, in order to reduce disposable nappy waste and the circulation in the waste stream of single-use plastics.

The Bill is supported by the Nappy Alliance, a trade association of reusable nappy manufacturers, who believe that parents should be given more information about reusable nappies, empowering them to make an informed choice about the products that they choose to use.

“Reusable nappies have increased in popularity in recent years but there is much more that can be done to support and entice new parents, by giving them more product information and ensuring that they are not be mislead by so-called ’eco’ disposable nappies which are not environmentally friendly.”

“We do not in any way advocate for a ban on disposable nappies, because we know that they are a convenience in the lives of busy families. But, by opting to use reusable nappies, parents in the UK alone could help reduce the number of nappies thrown into landfill, which is currently eight million a day.”

About the Nappies (Environmental Standards) Bill

The Nappies (Environmental Standards) Bill will establish environmental standards for nappies and making provisions about the advertising and promotion of nappies in reflection to those standards to prevent false advertising. It will also establish an industry and government led campaign to promote reusable nappies that meet these environmental standards. The Bill will look to encourage local authorities across the country to roll out reusable nappy voucher schemes.

A report by The Institute of Civil Engineers and The University of Northampton shows that these schemes are delivering significant cost and environment benefits for local government and families.

The environmental impact of disposable nappies

The average baby uses 4000 nappies up to potty training (weighing up to 120kg), the majority of which will go to landfill – 8 million of them every day in the UK alone. The composition of a disposable nappy means that some elements will take multiple lifetimes to degrade. The plastics used on nappies are Polypropylene (liner to stop wetness) and Polyethlene (prevent leaks), along with elastics, tapes and adhesives to secure the product. Together these make up 30% of the materials used in a nappy. (Environment Agency)

About the Nappy Alliance:

Nappy Alliance is a trade association for independent providers of re-usable nappies, promoting the environmental benefits of reusable products and consumer choice for new parents, and better environmental standards and the use of environmentally friendly nappies to central and local government. The members of the Alliance are: Bambino Mio, Bambooty, Charlie Banana, Close Parent, Little Lamb, The Nappy Lady, Tickle Tots, Tot Bots and Babi Pur.

The Nappy Alliance has made significant progress over the past 16 years to create a growing market of sustainable baby, parent and environmentally friendly products, with all major supermarkets as stockists and 30% of parents opting to use them at some stage. The Alliance has successfully engaged with national and local influencers, securing reusable nappies as ways to reduce waste in WRAP and Local Government Association guidance (Routes to Reuse 2014), along with securing a revised Life-Cycle Assessment from the Environment Agency (2008) that concluded up to 40% of co2 savings could be realised when washing reusables efficiently.