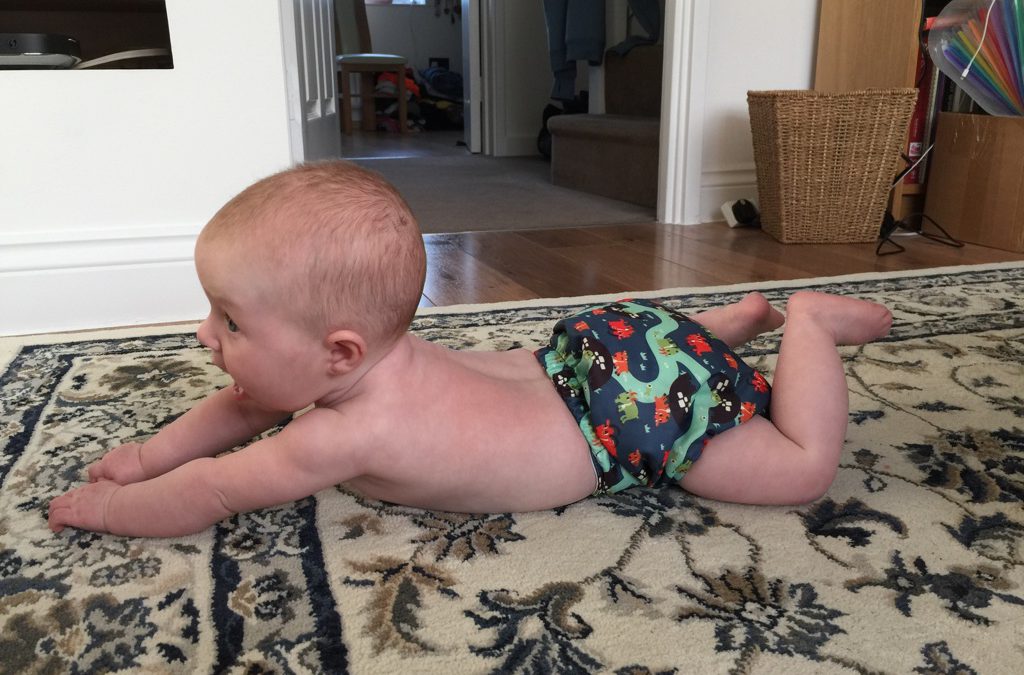 It was actually my husband who suggested we try real nappies because he just couldn’t bear the thought of the incredible amount of landfill one child would create – he still struggles with the sheer volume of stuff a small person needs! So I diligently did my research and it appeared that real nappies were actually a viable option – cost effective, not too much extra effort and conscience relieving.

I bought a set of real nappies before our daughter arrived; some parents prefer to wait until their little one arrives, but I was eager and love a bit of research and organisation – the choice is up to the parent. I got a good deal and used my Real Nappies for London voucher to help with the initial outlay. When she first arrived, I was a bit overwhelmed and the thought of using real nappies with all that newborn breastfed poo was a bit much for me, but gradually we introduced one or two real nappies into our daytime routine when we were at home. I didn’t initially have the confidence to take her out in a real nappy – I feared leaking and carrying round lots of nappies and clothes ‘just in case’ and I also was unsure, as a new mum, about changing her in public. Then, when she was about 3 months old, we went to a baby massage class and I saw another mum confidently and happily changing her baby using real nappies. I was curious and used it as a chance to strike up a conversation, and she has turned out to be one of my closest mummy friends now! Having that conversation and seeing someone else using real nappies gave me the confidence to use them more often when we are out and about, not just at home.

There are options to try before you buy via local real nappy libraries where you can loan different styles and brands. Along the way, I’ve added some variety to my ‘stash’ with different nappies serving different purposes – some are good for being longer lasting, some are slimmer fitting, some are better at withstanding those epic toddler poos and the nappies that work best for my daughter change as she grows – she’s never been a chunky baby and so the slimmer fitting ones are working better for her now she’s running around. I am happy with my purchases and have been able to lend the smaller sizes to a friend who has also become a real nappy convert!

I think one of the dangers of using real nappies is stopping yourself buying more all the time! The brands update their designs on a regular basis and it really does brighten up nappy changes when you get to pick from your favourite designs! The extra washing really is not noticeable when there is so much more to do with a baby anyway and dealing with dirty nappies is never going to be fun, having to put a poo in the toilet instead of wrapping it up is really not that much worse – I promise!