When I was researching my book Nappy Free Baby: a practical guide to baby-led potty training from birth, I found out some amazing facts.

In the UK in 1958 – only two generations ago – a study of 5000 mothers found that a whopping 85% introduced the potty before six months, with 60% even starting before one month.

So why on earth did mums (and dads) put their babies on the potty so early?

They were capitalising on the fact that newborn babies are born with a reflex that makes them empty their bladder and bowel when their nappy is off (did your baby ever wee or poo when you were trying to change her?), the reflex is also triggered when they are held in a squat position.  After a while, babies get used to using those muscles, and releasing them becomes a habit whenever they are held in position. This means that instead of being conditioned to wee and poo in a nappy, they become accustomed to using the potty. 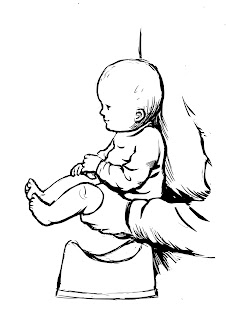 Those mums did it because it saved them a lot of washing, it prevented nappy rash, it made their babies more comfortable and it made the transition to toilet independence earlier and smoother.  Modern parents have also found there are a lot more benefits, which I’ll talk about later.
So why doesn’t anyone do that anymore?

Right at the start of the sixties, two events marked a watershed in the history of nappies and potty training.

1)     In 1961 Proctor and Gamble launched a new nappy innovation: Pampers
2)     In 1962 Dr T. Berry Brazelton published a paper that advocated a delayed start to potty training.
Brazelton knew that potty training was possible from the earliest weeks by utilising reflexes and conditioning, but he thought that parents would put too much pressure on their babies, and use coercive tactics to try to encourage potty use before they could participate consciously.  He argued that it was best to wait until after 18 months before initiating potty use at all.   At that point, toddlers would be able to take a more independent role in the process.
Brazelton’s advice, coupled with the advent of disposables and their effective advertising campaigns, meant that toilet training was delayed until later and later, and nowadays many parents don’t even start until 2 ½ years or even later. Most parents have no idea that babies are actually capable of using a potty from birth.
So is BLPT coercive?
No! BLPT is an extremely gentle and intuitive way to respond to your baby.  With BLPT, parents begin to learn how their baby communicates a full bladder or bowel – in little babies, that might be through crying , grimacing, grunting or wriggling.  The parent also get to learn babies’ regular patterns for urination and defecation.  Holding baby out to help them pass a bowel movement or empty their bladder is very much like helping them to burp.   They can do it by themselves, but they will feel much more comfortable if you help them.  And you will feel more connected to baby, too.  So BLPT is far from coercive.  Parents find that in fact it opens up a whole new channel of communication with their baby, so that they become closer and more confident.
Do I have to watch my baby all the time?
No.  For a start, you don’t have to do BLPT all the time.  You can just do it when it makes sense for you.  Many parents find it very easy to predict when their baby is about to poo, so a lot so parents just do BLPT for bowel movements.  This can be so successful that they rarely have to change a dirty nappy.  Other parents just pop baby on the potty or hold them over the loo every time they change them.  This helps nappies stay drier and cleaner for longer.  Some parents just do it when their baby is crying and uncomfortable to help them pass wind and poo.  Some parents use the method at home, but not when out and about.  There are many different ways to use the technique.
It’s completely up to you how often you do it.  Most parents use nappies alongside BLPT, at least during the first year.

How can I find out more?
I’ve just published a book Nappy Free Baby: a practical guide to baby-led potty training from birth, (Vermilion, 2015) where you can read all about this method. 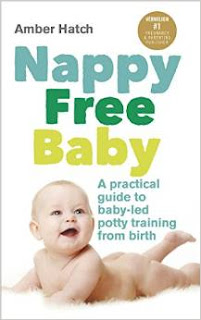 To celebrate its launch, Real Nappies for London is running a competition to win a copy of my book.

To enter – all you have to do is try putting your baby on the potty the next time you change her/him and see what happens. Then write a comment in the box below to tell us how it went. The best comment wins a copy of my book!  We will announce the winner on Monday 29 June at 12 noon.
You can also find out more about BLPT on my website www.nappyfreebaby.co.uk
Back to the Blog